Take back control of your peace of mind with the help of foam insulation.

Get Started with a Free Estimate

Poor Insulation in Your Home Can Cause a Lot of Headaches

Every winter it never fails – Your pipes freeze and burst. The summer brings its own issues with condensation forming on your walls.

It may not be apparent to you at first, but there is a common factor that leads to these annoying problems – little to no insulation in your home.

The biggest annoyances we get calls about here at RetroFoam of Michigan are condensation and mold issues, ice dams, and frozen pipes. We’ve had homeowners hit the annoying trifecta by getting hit with all three of these throughout the year and changing seasons.

So, what is it about lacking insulation that causes these problems?

What Causes Problems Like Condensation, Ice Dams, and Frozen Pipes?

There are three scenarios in your home if you’re experiencing the problems we listed above – you either have no insulation in your home, there isn’t that much insulation, or you have traditional insulation that allows for air movement.

Airflow into and out of your home is the root cause of each of these problems. So, let’s discuss each.

Condensation and Mold Problems in the Home

If you have airflow into and out of your home, there is going to be a large temperature difference.

Think of a can of pop in the summer. The contents of the can are cold, while the outside air is hot. Once those two elements meet, condensation is formed on the can. The same thing happens in your home, usually in and on the walls.

This condensation on the walls can happen in the winter or the summer, it’s just about the hot meeting cold.

So if you have traditional insulation in your home, like fiberglass or cellulose, that still allows for air movement it’s possible to see this kind of condensation. The bigger problem is what the condensation brings along with it.

Traditional insulation is known to retain moisture, which means it’s a prime place for mold and mildew to set up shop. That mold can easily spread out onto your walls, as well as releasing spores out into your home. If you or one of your family members suffers from allergies, the added mold could lead to issues with pre-existing conditions like asthma.

You can find this same condensation in your basement and crawl space.

Ice Dams Forming on the Roof

As you look around your neighborhood in the winter, you might be seeing large icicles hanging from the roof of many of your neighbor’s homes and think that is just a normal part of winter.

Well, unfortunately, we’re here to tell you it’s not.

Here’s how the ice dams are formed.

There’s a bunch of snow on your roof, but without adequate insulation, the heat from your home rises and escapes through the roof. This causes the snow at the top of the roof to melt and run down to the gutters.

That melted snow freezes at the overhang creating a large ice dam starting at the gutters. The problem here is those ice dams can cause a lot of structural stress on your roof which can lead to damage in the future.

Frozen Pipes in the Home

You notice the water pressure in the shower is going down and the temperature is slowly getting colder and colder.

Your pipes are beginning to freeze and if you don’t act quickly they are going to burst. This happens when the cold outside air leaks into your home. That cold air meeting those pipes will cause the water inside to burst.

Are you seeing a common theme in all of these problems yet? It’s air leaking into the home with no kind of barrier to stop it. Don’t worry though, you have a way to stop all of this.

"I am a repeat customer, I was so impressed with my energy savings the first time that when I moved I had to do it again. The work crew was wonderful, when they left the only sign that anyone had been here is that my home was cozy and warm. It's absolutely the best thing to do for your home.”

How Foam Insulation Can Get Rid of These Annoying Problems

Take back control of your home and keep that outside air out so you don’t have to face these problems ever again.

Foam insulation in your home will create an air seal that will keep out the air creating that condensation, ice dams, and frozen pipes. You’ll be keeping the air you pay to heat or cool inside while keeping the outside air out where it belongs.

Sure, foam insulation creates an air seal, but the composition of foam insulation can help prevent moisture issues as it doesn’t allow the cold and hot air to meet. The material also doesn’t retain moisture the same way traditional insulation does, which also means you’ll be avoiding the growth of mold and mildew.

Spray foam on the attic roof deck will stop the snow melt so ice dams will be a thing of the past, but there’s another added benefit as well. Stopping those ice dams will also help protect and prolong the life of your roof since there won’t be the moisture and added stress of the ice dams pulling on the shingles.

When it comes to those frozen pipes, if they are inside the building envelope then adding foam insulation will help to keep them from freezing again. 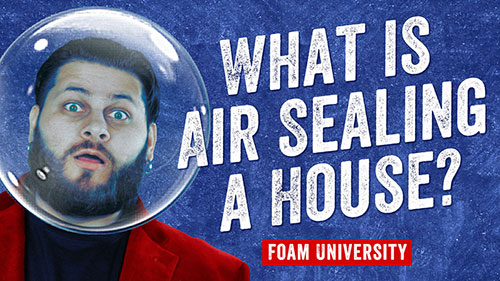 Fix Those Annoying Problems with the Help of Foam Insulation

Not many things will ruin your day like having frozen pipes in your home.

Have you noticed a musty smell in your home? Or maybe it feels more humid inside than outside?

How to Prevent Frozen Pipes

It’s a nightmare many homeowners dread every winter – frozen pipes.